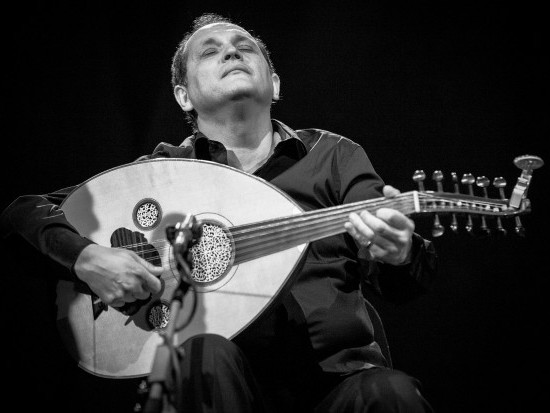 In the course of nine innovative, timeless albums spread over twenty years, Anouar Brahem has established himself as one of the most original and talented musicians yet to record on the prestigious ECM label.

Brahem is the oud’s conjuror, a master at bringing out the acoustic magic which this age-old traditional Oriental lute carries inside its calabash: the musical heritage of the Arab and Islamic worlds.Brahem is a phenomenon, a concentrated mix of prolific paradoxes: he is a supremely subversive classicist; a solitary soloist, resolutely open to the world; and a "culture smuggler", a man ever inclined to venture beyond his own limits and push back musical frontiers… without yielding an inch to aesthetic standards forged across time and tempered with deep respect for tradition.
Because he has always recognised this fundamental complexity, it has become his strength. And because he’s always sought to weave this abundance of influences and disparate passions inside the very material of his work and compositions, Anouar Brahem is today recognised as one of the rare composers and improvisers capable of inventing a form of music which is totally rooted in an ancestral culture: it is highly sophisticated, yet eminently contemporary, and its ambitions are global.Brahem brings the bewitching poetic colours of the oud to a host of diverse musical canvases.
From the rich repertoire of Jazz – John Surman, Dave Holland and Jan Garbarek are just some of the leading players to succumb to Brahem's melodic spells to the multiple and diverse traditions of Mediterranean and Oriental influence, from his native Tunisia to the confines of India and Iran, his sensitive yet rigorous music ceaselessly redefines a cleverly composite universe of poetry and culture, ever balancing between discretion and sensuality, nostalgia and contemplation.(Stéphane Olivier/ www.anouarbrahem.com)