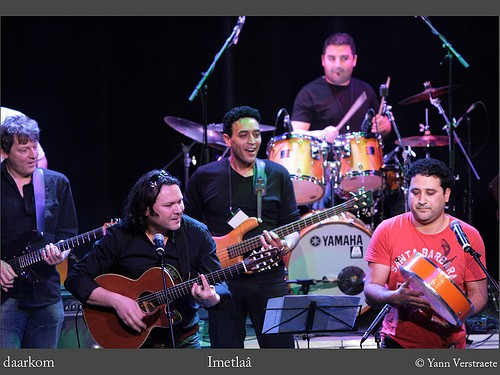 In the Moroccan Rif Mountains there lives a people that calls itself Imazighen, which means, freely translated, ‘free people’. They share their ancestry with many North Africans and peoples of the Sahara. In our region they are known as Berbers and are often mistakenly referred to as Arabs. The term Berber dates from late antiquity, when it was first used to designate North African tribes who lived outside the Roman influence area. To this day, they are the oldest known people to inhabit North Africa and the Sahara. More than half of all North Africans have Berbers – and not Arabs – among their ancestors. Today, there are significant communities of Imazighen in Morocco, Algeria, Tunisia and Libya, as well as in Mauritania, Mali, Ghana and Europe.

Despite the gradual Arabisation of North Africa and the consequent ban on education in their own language (Amazigh), their rich culture has been preserved in many regions. In Morocco, there is still a vibrant Berber culture which today is gradually being recognised by its own government, and which has, through migration to Europe, become introduced in our regions as well. Roughly 80% of all Moroccans living in Belgium are Imazighen.

The roots of the band members of Imetlaâ – which means ‘cosmopolitans’ – also hark back to the Amazigh community from the Moroccan Rif Mountains. The original rhythm and timbre of the music from this area resounds in their songs, but they also like to mix in influences from far beyond. Imetlaâ captures the experiences of many Imazighen in the Netherlands, Belgium and elsewhere in enchanting music and strives, in a very unique way, to promote dialogue and cultural exchange between diverse populations. The ancient Izran, a veritable treasure of songs of life from the Rif region, which is transmitted from generation to generation, is in turn interpreted and preserved by Imetlaâ. They combine the sounds of the adjun (a traditional percussion instrument) and the reed flute with contemporary instruments in an inimitable way. It is here that Imetlaâ reveals its true cosmopolitan nature, in the melting pot of sounds and musical genres, breathing new life into the musical heritage of their ancestors that echoes times long gone.

The perfect music for a beautiful Berber New Year celebration!