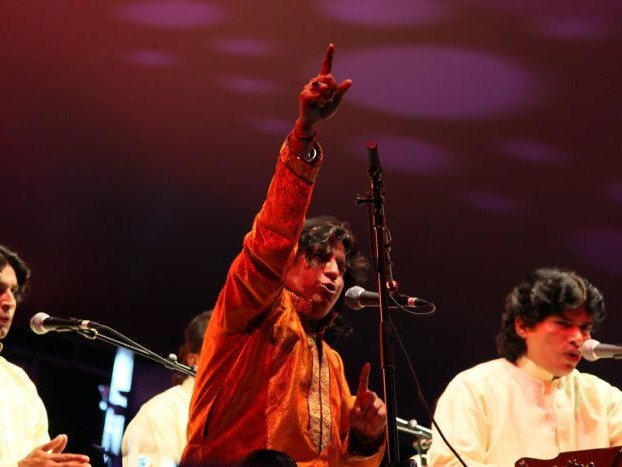 Once again BOZAR and Moussem present an evening from the successful series of performances on the mystic tradition in Islam. Sufi Night reveals the impressive diversity of Islamic spiritual music.

Guest of honour is Pakistani singer Faiz Ali Faiz. Seen by many as the successor of Nusrat Fateh Ali Khan, Faiz Ali Faiz won the prestigious BBC Award for World Music for his personal but faithful interpretation of the Qawwali, a tradition maintained by his family for 8 generations (!).

A company of Saman dancers, who have arrived for Europalia Indonesia, perform their astonishing ‘dance of a thousand hands’. The dancers kneel in a row and, with their upper bodies, perform complex, synchronised choreographies, often at lightning speed. In 2011 the Saman dance was recognised by UNESCO as a part of World Heritage.

Noureddine Tahiri of Morocco studied recitation of the Koran under grand master Sheikh Mekki Benkirane and practised the Samaa with several Sufi brotherhoods. The Samaa are harmonised ritual hymns to Mohamed and their origins can be retraced to the beginnings of Islam. Thanks to a special breathing technique, choir and soloist often blend into a single voice.

Naghmana A Hashmi, Pakistan's ambassador to the EU, gives a reading in which she sketches out the origins, spiritual background and rich history of the ecstatic Qawwali music in her country.